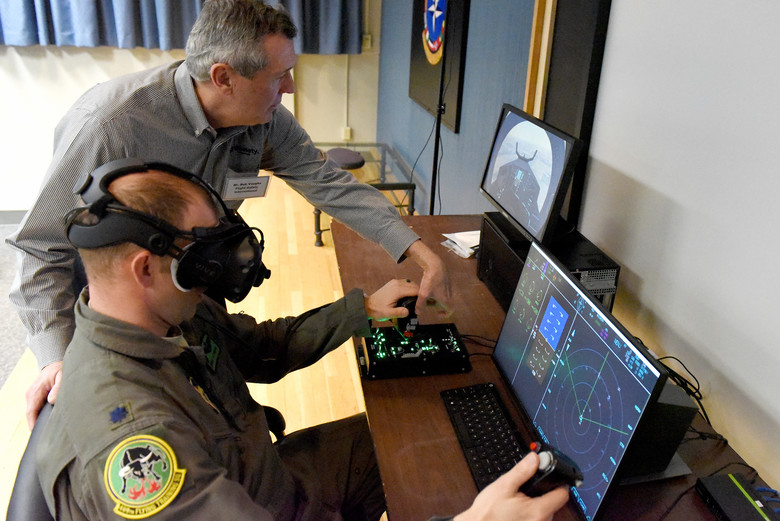 SHEPPARD AIR FORCE BASE, Texas – Two pilots maneuvered their aircraft March 7, 2018, each trying to gain a tactical and offensive advantage while maintaining control of their F-15 Eagles.

Their heads thrashed back and forth, up and down to keep eyes on one another thousands of feet above the ground. It sounds like a real scenario Air Force pilots could face on any given day.

These pilots, however, were firmly on the ground as they tried out a mixed reality simulator from Flight Safety International that required testers to don a headset that combined virtual and augmented realities into one.

“It was surprisingly realistic,” said Lt. Col. Jeremy Putman, 469th Flying Training Squadron commander at Sheppard Air Force Base. “It was better than I expected.”

Maj. Steve Briones, 80th Flying Training Wing commander’s action group and a member of the group looking into the technology, said mixed reality could be an important piece to pilot training moving forward. He said they are in the process of determining how such a program would enhance the training syllabus at the Euro-NATO Joint Jet Pilot Training program and whether or not it is a feasible option.

He said the platform would allow the 80th FTW to take learning where the students are as well as take some pressure off the students as opposed to the regular flight simulators, where students are being graded on their performance.

“It costs so much money to launch an airplane. We’re spending fuel, there’s maintenance, not to mention we’re beating up the jets,” he said. “If we’re able to have a semi-realistic simulator down here on the ground where students can get more repetitions – this is not going to replace the air-sense that you get from flying an actual airplane, but if the student can see the picture over and over many times in a 15-minute period, then he doesn’t have to dedicate three hours to see it.”

In the past, students would go home and prepare for a training flight or session by sitting in front of a poster that provides specific information. Enhanced chair flying would allow them to use the simulator for more realistic preparation.

“This would enable them to practice and get lots of repetition,” he said.

Putman said the technology also provides better visual acuity and clarity of picture than the T-38 and T-6 simulators that have been used for years. It’s definitely better than what he had more than 15 years ago during pilot training. He said when training on basic fighter maneuvers, an instructor would stand behind him with an aircraft model on a stick to simulate an adversary behind him and he would have to react to what he was seeing.

“A lot ahead of where we’ve been,” he said of the technology.

Briones said there isn’t a timeframe as to when a decision will be made on adding new technology to the curriculum. He said they are gathering information and input so when that time comes, they’ll be ready to act.